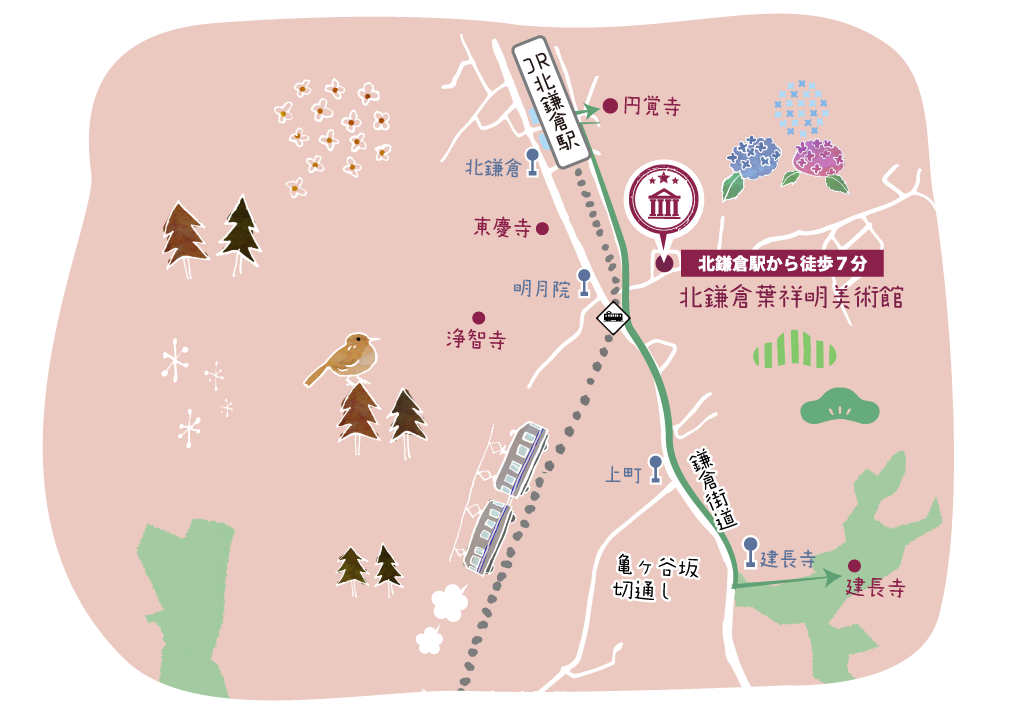 Kita-Kamakura is home to many temples, including buildings that are National Treasures or Important Cultural Properties.These temples are also famous for their flowers and autumn foliage. They are great places to enjoy a combination of brilliant architecture and beautiful nature.

Engakuji’s White Heron Pond is on the opposite side of the tracks at Kita-Kamakura Station from the temple’s outer gate or Somon. The pond got its name because the divine spirit of the Tsurugaoka Hachiman Shrine, it is said, took the form of a white heron and landed in it. As you can see, the construction of the Yokosuka Line split the access avenue to the temple.

The Legend of White Heron Pond
Hojo Sadatoki, the ninth regent of the Kamakura Bakufu (reigned 1284-1301), ordered a large bell to be cast, as a prayer the peace and stability of the country. The bell was so large, however, that its casting kept producing failures. Then Sadatoki prayed to Benzaiten, who is enshrined on Enoshima, and was told in a dream, “Dig at the bottom of the White Heron Pond.” Sadatoki did so and discovered a large chunk of gilt bronze in the shape of a dragon’s head. Using that bronze, the bell was completed at last. That bell is Engakuju’s Oogane, a National Treasure.

The Japanese Sweets Shop a Kamakura Literatus Loved
In front to the ticket wicket at Kita-Kamakura Station is the Komaki, a famous Japanese sweets (wagashi) shop that the novelist Kawabata Yasunari (1899-1972) adored. Why not try having tea there, gazing at White Heron Pond, with the sounds from the railway crossing as background music?

Expelling Delusions
The Sanmon is the main entrance to a Zen temple. Its name means both “mountain gate” and “three gates,” that is, the Three Gates of Liberation: the gate of emptiness, the gate of formlessness, and the gate of nonaction. The three liberations are the objectives of Zen training: to realize that everything changes, not to be captured by form, and to attain the state of no-self.The rafters supporting the second-floor eaves are arranged in a fan-like shape radiating from the center point of the building. That structure is characteristic of Zen temples. Be sure to check those rafters out!

Would you care to dance?
Every August, a huge Bon-odori dance festival is held at Engakuji, during which people dance in a circle around the Sanmon. Please join in!

A Zen Meditation Hall
Senbutsujo means, literally, “a place for selecting Buddhas” and indicates a place for zazen, Zen meditation. The original Zen meditation hall at Engakuji burned down in 1563. In 1699, Matsudaira Tadamitsu (1651-1730), the lord of Ise Nagashima (now Kuwano City, Mie Prefecture), donated the Saizokyô, a full set of the Buddhist sutras, to Engakuji. This building was built then to serve as both a storehouse for the sutras and a meditation hall. A statue of Yakushi Nyorai is enshrined in the center of the hall.

Experience Zazen!
Engakuji regularly holds zazen, Zen meditation, sessions in which ordinary beginners are also welcome to participate. The location is the Kojirin, next to the Senbutsujo. Why not give it a try?

The Sanmon, which was rebuilt during the Edo period, is the largest Buddhist temple gate in the Kanto area. It is two-storied, with three by two bays and one entrance. In the upper story (not open to the public) are enshrined statues of the historical Buddha, Shaka Nyorai, who taught the three liberations, and the 500 Arhats, his disciples. It is prayed that the hearts of those who pass through the gate underneath them will become pure. The hip-and-gable roof has copper sheeting. A plaque with the words Kencho Kokoku Zenji (Kencho flourishing country Zen temple) is displayed in the center of the front of the gate. The calligraphy is said to be by the Emperor Gofukakusa.

The Kenchoji Sanmon Legend
Once upon a time there was a tanuki (raccoon dog) who was raised at Kenchoji. One day the tanuki learned that the chief priest and others at the temple were trying to build the Sanmon again. To repay their kindness, he transformed himself into a priest and was instrumental in assisting the chief priest in carrying out his plan. That is why, even today, Kenchoji’s Sanmon is also known as the Tanuki Mon (Tanuki gate).

The Butsuden (Buddha Hall) at Kenchoji is the fourth since the temple’s founding. The building itself was originally built at Zojoji temple in Edo as the mausoleum for Go (Sugen’in) (1573-1626), the wife of Hidetada (1579-1632), the second Tokugawa shogun. It was moved to Kenchoji in 1647. Its exterior has the subdued atmosphere one would expect of a Zen worship hall. The interior, however, is lavishly decorated, with a coved and coffered ceiling painted in bright colors. The transoms between the lintels also have elaborately carved phoenixes.

Restored Glory
A karamon gate is one with a roof with undulating bargeboards that turn up at the left and right edges. This style of gate is a characteristic feature of Momoyama period architecture. This gate was moved from Zojoji temple in Tokyo, as was the Butsuden. It was originally the middle gate in front of the mausoleum for Go (Sugen’in) (1573-1626) (the building that is now the Butsuden). Step back and enjoy the gorgeous overall appearance of the gate, then come closer to delight in its magnificent decorations, using peonies, for example, as motifs. With its restoration in 2011, the vividly colored appearance of the gate when it was first built has been reborn.

Kenchin Soup--what’s that?
This example of Buddhist vegetarian cuisine starts with daikon radishes , onions, and other vegetables stir-fried in sesame oil, then simmered in stock with tofu. The tale is told that the recipe was invented by a priest at Kenchoji and spread throughout Japan.