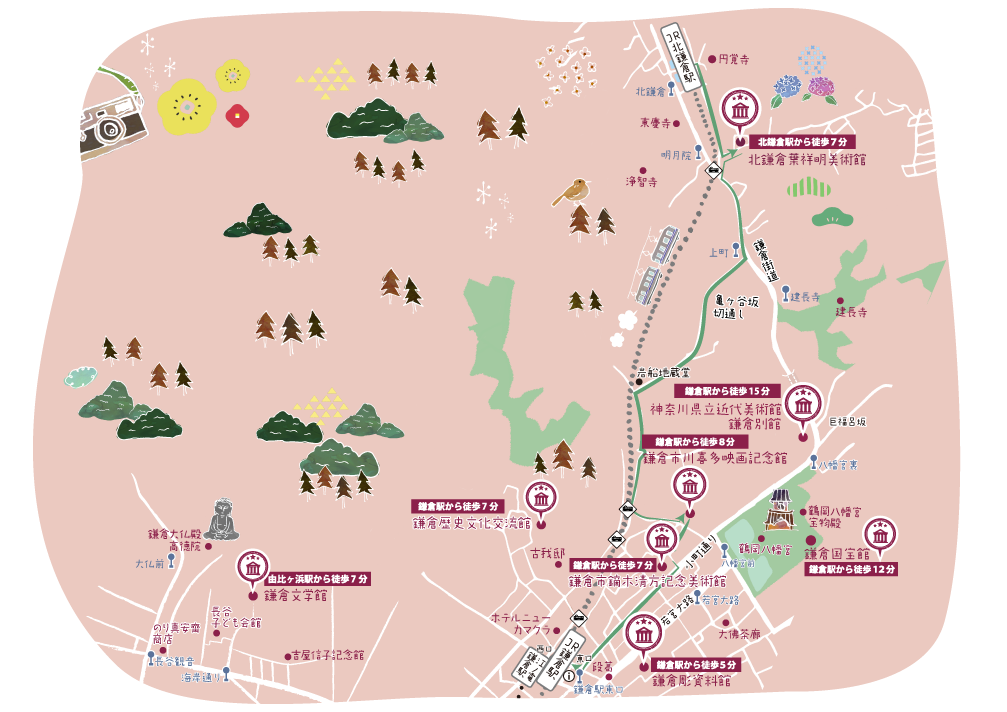 Tour these museums reveal the tastes the artists and collectors who founded them to gain some fascinating insights.

This Western-style building reveals the worldview of artist and poet Yoh Shomei.

【Shirasu】
What a cute building--it’s like a house in a picture book.

Nagai Kana, Curator, Kita-Kamakura Yoh Shomei Art Museum
Hello. This building is basically in the British Georgian style, with Yoh Shomei’s own touches. The exterior, with its warm brick walls, is surrounded by the rich natural beauty of Kita-Kamakura. The furnishing inside are from Italy and other places in Europe. The effect is to create an elegant, but approachable space, much as we seen in Yoh Shomei’s work.

【Komachi and Shirasu】
Think about sitting on that sofa and reading a picture book!
It would be lovely to sit on a bench in the garden and relax, too.

A family that extended its hospitality to lots of people in the film world.

【Shirasu】
Wait a second. There’s another building behind the museum.

Abe Kurumi, Curator, Kamakura City Kawakita Film Museum
Welcome to our museum. This building was originally a vernacular dwelling in Hagino, Kanagawa Prefecture and dates from the latter half of the Edo period. The philosopher Wajiro Tetsuro (1870-1960) moved it to Nerima, Tokyo, where he used it has his home. Then Mr. and Mrs. Kawakita moved it here and made it a place to entertain people in the film world from overseas.

【Komachi】What a story! What sort of people visited here?
Abe Kurumi, Curator, Kamakura City Kawakita Film Museum
A great many from the film industry, we are told. From France, they included the famous actor Alain Delon and the movie director François Roland Truffaut (1932-1984). And Wim Wenders visited from Germany.

【Shirasu】Wow, this is an amazing place.
【Komachi】For any film lover, it’s sacred ground.

Abe Kurumi, Curator, Kamakura City Kawakita Film Museum
This building stands on an upland above one of the steep, narrow valleys so distinctive of Kamakura. The Japanese-style building, with its tile roof, harmonizes with the hills behind it. Actually, it’s the only place that has been designated a Important Structure of Scenic Beauty by the city of Kamakura. It is open to the public twice a year, in spring and fall, when people have a good chance to get a close look at it.

【Komachi】
Cherry trees, hydrangeas--the flowers must be a delight throughout the year. It’s a perfect place for a stroll. 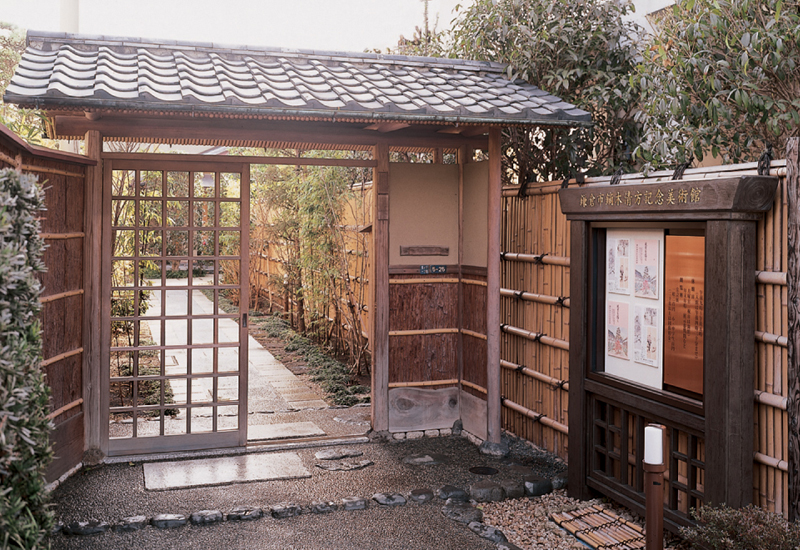 【Komachi】
Look at those lovely wooden latticed doors. They look like something in a movie.

Imanishi Ayako, Curator, Kaburaki Kiyokata Memorial Art Museum
The gate to the museum is a reconstruction of the gate to the home of Kaburaki Kiyokata (1887-1972), using the original materials.
Kiyokata was living in Ushigome, Tokyo, when he decided he wanted a gate with latticed doors. He ordered the tiles for it from Kyoto, but halted the project because of the war. He buried the tiles and then evacuated out of Tokyo.

【Shirasu】
Was his house okay?

Imanishi Ayako, Curator, Kaburaki Kiyokata Memorial Art Museum
No, the Ushigome house burned down, but the tiles survived. After the war, Kiyokata moved to the Zaimokuza area of Kamakura. Then when he was building his house on this land in Yukinoshita, in 1954, he used the tiles and decided to build the latticed gate he’d wanted. The tiles have been replaced, but you can still get a send of those days gone by.

【Komachi】
This gate must have meant a lot to him. He must have been so pleased when it was completed!