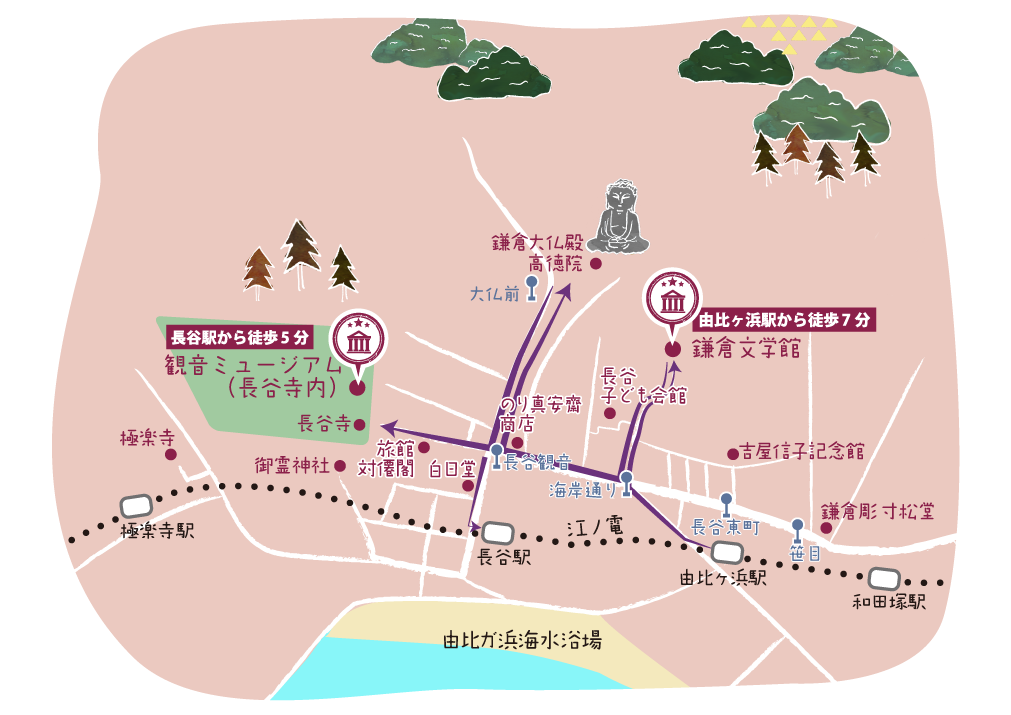 Haiku by Takahama Kyoshi and Tanka by Yosano Akiko Why not stroll Yuigahama and Hase with the works of these poets?

Monument to the house of Kyoshi Takahama

“From Yuigahama and the sound of the waves—the first train.” — Takahama Kyoshi

In these mountain recesses of Kamakura the sea could sometimes be heard at night. Shingo wondered if he might have heard the sound of the sea. But no--it was the mountain.

This shrine, said to have been founded in 710, is the oldest shrine in Kamakura. The Azuma Kagami, the chronicle of the Kamakura Shogunate, records that Minamoto Yoritomo and his wife Masako worshipped there. Kawabata Yasunari lived near the shrine and made this area the setting for his novel The Sound of the Mountain.

Shirasu
Hello. Oh, you can see the sea from the gallery!

Kamakura Museum of Literature curator Masako Yamada
Hello. My name is Yamada, and I am a curator at the Kamakura Museum of Literature.
The museum’s building was originally the summer home of the family of Marquess Maeda, which was built in 1936. On a clear day, you can see all the way to Oshima, an island off the Izu Peninsula from the windows that face seaward. The lighting fixtures and stained glass in each room of the museum are also not to be missed.

Komachi: Which of your exhibits do you particularly recommend?
Kamakura Museum of Literature curator Masako Yamada
Kamakura Museum of Literature
I’d say the “Kamakura Literati” corner in our Standing Exhibition Room 1. The Kamakura Literati organized some activities that were quite unique for writers associated with Kamakura. Kume Masao, Osaragi Jiro, and Kawabata Yasunari opened the Kamakura Bunko lending bookshop during World War II. They also organized carnivals and all sorts of other events in Kamakura. The panels present photographs from back then.

Shirasu: Wow, you’re right! I see Kawabata Yasunari’s name listed as one of the judges in a beauty contest!

Komachi: Those are pretty unusual activities for serious writers. But, by the way, what Kamakura-related books would you recommend?
Kamakura Museum of Literature curator Masako Yamada
Two that come to mind are Natsume Soseki’s The Gate, which is set in Engakuji, in Kita-Kamakura, and Kawabata Yasunari’s The Sound of the Mountain, which is set in Hase. Actually, our building was the model for the villa in Mishima Yukio’s Spring Snow. That book includes a scene in which the owner uses a telescope to look at the sea from his villa.

Komachi: I didn’t know that! I’ll put that book next on my reading list.

Shirasu: What else do you recommend?

Kamakura Museum of Literature curator Masako Yamada
The roses in the garden are lovely in spring and fall. And they include varieties of roses that originated in Kamakura and can be seen nowhere else. We also hold classical and jazz concerts in the garden when the roses are in season. An open-air concert is quite special, you know.

Though Buddha he may be, How handsome Shakamuni is Among the summer groves of Kamakura. — Stele with poem by Yosano Akiko

The erection of the Great Buddha at this temple is described in the Tokan Kiko, a travel journal from the Kamakura period. The temple precincts include a stele with this poem by Yosano Akiko and also one with a poem by the haiku poet Hoshino Tatsuko: “On wintry days, the Great Buddha shifts to the mountain.”

“Kannon, for the sake of us, our long days.” — Stele with haiku by Takamatsu Kyoshi

This temple, commonly known as the Hasedera Kannon, has stele commemorating Takamatsu Kyoshi, with one of his haiku, and the critic Takayama Chogyu as well as a bust of the writer Kume Masao. The temple precincts are alive with the flowers of the seasons, with the hydrangeas of early summer and the autumn foliage particularly beautiful. The terrace next to the main hall offers an excellent view of Yuigahama.

Koizumi Yakumo (Lafcadio Hearn) described Hasedera as it was in the Meiji period in Glimpses of Unfamiliar Japan (1894). The main temple hall had no electric lights, of course. He found Kannon, gradually revealing herself out in the light of the lantern, quite moving. Hers is the face of “eternal youth and infinite tenderness,” he wrote.