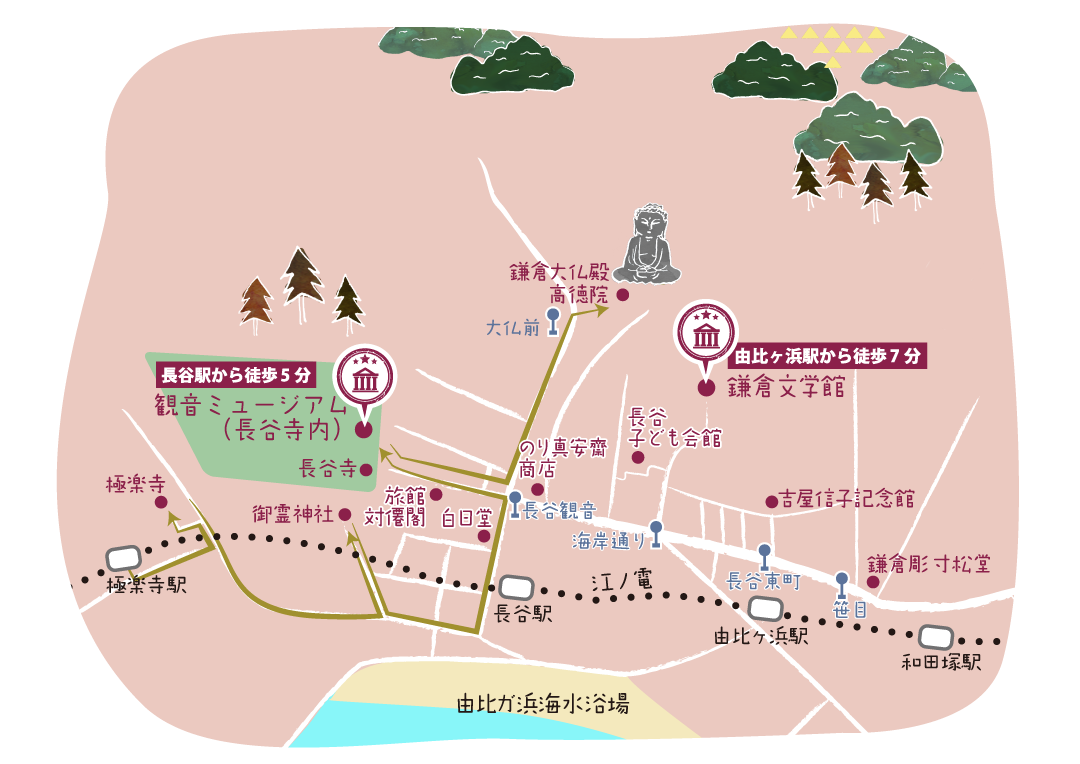 Enjoy a taste of medieval Japan as you explore the history of Hase and Gokurakuji.

Holding his hands in front of his chest, the Shaka Nyorai is making the tenborin mudra, the gesture that indicates he is teaching. The statue is valuable as there are very few examples in Japan of a Shaka Nyorai exhibiting this mudra. The authoritative face, the firm body, and the beautifully flowing robe are impressive.

The ten great disciples are the most distinguished disciples of the Buddha. One of them, Rāhula (Ragora in Japanese)—the son of the Buddha born before his father renounced the world—is said to have been especially meticulous in his observation of the commandments. These standing statues are the attendants of the Shaka Nyorai, the principal object of worship. There is a perceptible sense of harmony about the group even though the realistic carving and the differences in appearance, age, and garments carefully express the individuality of each disciple.

The vicinity of Gokurakuji has been used for film locations!
The quiet atmosphere around Gokurakuji has provided the setting for many films and television dramas. Recently, Our Little Sister (2015) was filmed here.

Every year, a parade takes place at Goryo Jinja Shrine on September 18, the anniversary of the death of Kamakura Gongoro Kagemasa, the enshrined deity. Wearing the Okame, demon, goblin, and other masks used in traditional music and dance, a group of ten men parade through the streets in the vicinity of Goryo Jinja accompanied by portable shrines. You can visit the treasure house in the grounds of the shrine to view the masks worn in the parade.

The Kannon Museum (at Hasedera Temple)

Shirasu
What are kakebotoke? They certainly convey a strong presence.
Miura Hiroki, Curator, The Kannon Museum
Kakebotoke are plaques that tangibly embody the syncretism of the Shinto and Buddhist faiths. They are valuable cultural assets that show us some aspects of faith at Hasedera in medieval times. With diameters ranging from 70 to 80 centimeters, these plaques are also uncommonly large, which tells us that Hasedera was a major temple when these plaques were dedicated.

Komachi
Amazing! You can tell all that by looking at the kakebotoke?

Seated Figure of the Amida Nyorai, Bronze
(National Treasure)
Construction began in 1252
Material: Gilded bronze
Height: 11.3 m
Weight: Approx. 121 tons
It is possible to visit the interior of the statue from 8:00 to 16:20. Entrance fee: 20 yen.

The Symbol of Kamakura—The Daibutsu
This is the statue of Amida Nyorai, the principal object of devotion at Kotokuin. According to Azuma Kagami, a written chronicle of the Kamakura shogunate, the first wooden structure was completed in 1243. Casting the statue in bronze commenced ten years later.
The statue was originally gilded bronze, and you can still see some traces of gold on the right cheek. At first, the statue was housed in a great hall, but the building was battered by typhoons and tsunami and eventually destroyed, leaving only its cornerstones and the Great Buddha sitting in the open air. There is a very popular tour of the interior of the statue. (Separate entrance fee of 20 yen)

The setting for one of Ozu Yasujiro’s films
In the film Early Summer, written and directed by Yasujiro Ozu, there is a scene in which the character played by Setsuko Hara is sitting in front of the Great Buddha.